Introduce your project and write about your work.

In march I created a new branch called 'core6' to work on some general things in the core framework. In august I finished my work and decided to merge the branch back to trunk. My work was interrupted by a 4 months break caused by some time-consuming events at work and at home.

For those of you that are interested, I'll try to give an overview of the changes in core6. The changes are grouped in 3 main topics.
Fabian 'x3n' Landau, Orxonox developer
Top

The core-framework does a lot of helpful things; among them are Identifiers, Objectlists, Configvalues, and Smart-Pointers. Until now, all of those features were based on the common base-class OrxonoxClass. Every class (and every interface) had to inherit from OrxonoxClass in order to use the features of the core-framework. The advantage of OrxonoxClass was that we had all in one place, but at the same time this was also a disadvantage because it was impossible to use only a part of the framework's features.

Following the principle of separation of concerns I decided to split OrxonoxClass into multiple classes. This resulted in the following base-classes:
The inheritance among those base-classes is the result of the dependencies among the corresponding features: Configvalues require Objectlists and Objectlists require Identifiers.

The following class hierarchy shows the inheritance of the Pong gametype. The important point to note is that BaseObject (conceptually a class) inherits from OrxonoxClass, while Tickable (conceptually an interface) inherits from OrxonoxInterface. Both OrxonoxClass and -Interface inherit from Identifiable, Listable, Configurable, and Destroyable to combine all of the framework's features. 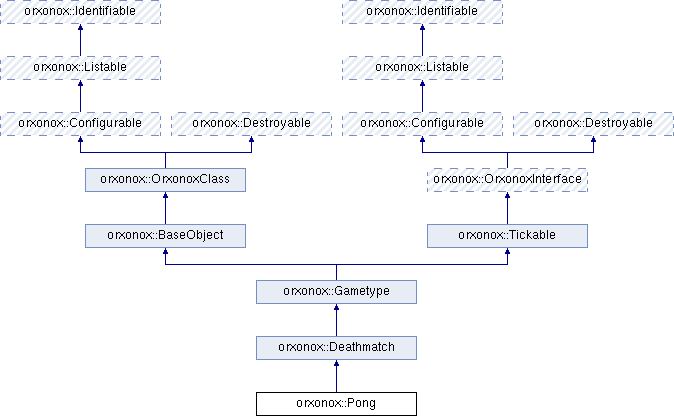 Until now there was a rule for each class inheriting (directly or indirectly) from OrxonoxClass: Write RegisterObject(Classname) in the constructor and CreateFactory(Classname) somewhere outside of the constructor. There were also some special cases: Classes which inherit directly from OrxonoxClass had to call RegisterRootObject(Classname) instead, and CreateFactory() did not work with abstract classes.

With core6, the rules have changed. They apply for every class inheriting (directly or indirectly) from Identifiable:
RegisterClass() is essentially just a rename of the CreateFactory() macro. I renamed it to be more consistent with RegisterClass() and to express the real meaning of the macro. RegisterAbstractClass() is new and allows to correctly define the inheritance of abstract classes. Until now, this was done automatically but not always correctly. RegisterRootClass() is not necessary anymore, the only real root class is Identifiable which is already known to the framework.

These changes allow to determine the class-hierarchy at runtime correctly even in special cases (like multiple inheritance among abstract classes). Having a correct class-hierarchy is important for features like Configvalues or XML-serialization which allow developers to override definitions in sub-classes.

Defining the inheritance of abstract classes manually by using RegisterAbstractClass() may be a little tedious, but on the other hand it's more explicit - and it's the only way to do it correctly.
Fabian 'x3n' Landau, Orxonox developer
Top

core6 introduces a new concept called context. A context contains objectlists. Every object belongs to a context which means that the object is stored in the context's objectlists. A context is passed to an object's constructor and replaces the old concept of the creator:
Until now, Objectlists were a part of Identifiers. Because Identifiers are static, Objectlists were also static: there was only one Objectlist for each class. With the introduction of contexts this changes: There may be multiple contexts at the same time, either parallel (if they contain different objects) or hierarchical (if one context contains the other context and all of its objects).

There is also a root-context. It is part of the framework and it is used whenever an object has no explicit context. It also serves as a root for all other contexts.

Currently contexts don't help a lot. However in future we may change some of our code. Consider the artificial intelligence which uses objectlists to find all enemies. Until now it iterated over the only static objectlist that existed. Now with core6, it iterates over the objectlist of the root-context. However it would be a lot more reasonable to iterate only over the objectlist of the scene because it makes absolutely no sense to attack enemies which reside in a different scene or even in a different level (remember that there is no interaction between scenes at all - different scene-graph, different physics - thus the AI would attack something that doesn't exist).

Thinking even more ahead I can imagine some sort of paging which splits space into multiple sectors (pages). Only objects in active pages are ticked and rendered (and considered by computationally expensive operations like AI and triggers). Until now, this would have been a difficult task. But with core6, each page could represent a context, which would make it trivial to iterate only over objects of active pages.


I hope this helps to understand the changes in core6. Every feedback is appreciated.
Fabian 'x3n' Landau, Orxonox developer
Top

Good work. This looks very useful and especially the last part about iterating through context-specific object lists is great. Now we only have to implement it.
"I'm Commander Shepard and this is my favorite forum on the internet."
Top

I am impressed. Good to see Orxonox improving.
I will update the presentation slides for the students and I will have to get used to the new framework before the students have their first questions.
Fail. Fail again. Fail better.
Top

Thanks for updating the slides. Let me know if you need some help or a guest speaker for the PPS.

Users browsing this forum: No registered users and 2 guests